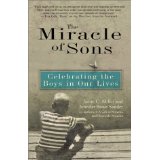 You could see it in his grin, or the in the pause of a deep thought; he was his grandfather’s boy. Almost as if they had rehearsed it before he was born, my son, Sean, bore a striking resemblance to my father’s demeanor and expressions; that of a southern man of Tennessee charm and simple elegance, cleft chin and all. 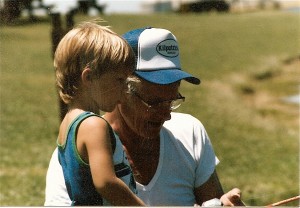 Their bond had been an instant one since diapers, something that I became increasingly grateful for as years passed. Every social or ethical dilemma found Sean asking himself a familiar question, “What would Papa do?” Following in his grandfather’s footsteps, he stood courageous against would-be bullies of smaller boys, even when outnumbered three-to-one. He lived to make Papa proud, and proud he was.

Sean marveled too, at the wisdom of his first grade teacher, but even more so, he was in awe of her ability to turn a book around displaying the picture on the page to the class while finishing at the same time, the words on that page without looking. He was so amazed by this feat that he decided to practice the art himself.

Up in his room, Sean’s audience consisted of his stuffed animals, which there were many, lining up all of his bears with the smaller ones sitting up front. He decided to examine his presence of speech and dramatic ability as well, recording his readings and then critiquing them afterwards.

Now Papa, not one to shower Sean with gifts of toys — more like stocks and bonds, or fishing gear — was impressed with his efforts and while shopping one day noticed an unusual looking stuffed bear sporting a nice tie and round-rimmed glasses. Papa bought the bear and brought him home to Sean.

“He looks older than the rest,” Sean declared, and decided to call him George. From that point on, George sat prominently placed during Sean’s readings.

Six months had passed and Papa, having recently been diagnosed with a respiratory condition, called one night to say that he wasn’t feeling well; that he was going to rest and asked if I would call in an hour to check on him. Waiting for the hour to pass was dreadful, but when the time finally arrived I began calling…no answer. I tried again, and still he did not answer. Fearful that I shouldn’t have waited, that he might be down and in need of help, I called a neighbor to come stay with Sean so that I could drive the short distance to his house.

It was a stormy night with rain blowing sideways in the wind. Sean was angry that I would not let him go with me. “He’s my Papa!” he cried. But I was afraid of what I might find and thought it better if Sean stayed behind.

As I backed out of my gravel driveway my headlights lit up Sean’s small, barefoot figure running out into the rain with George the bear in tow. Stopping, I rolled down my window and yelled at him to get back inside, but still his little feet kept coming. When he reached the car he handed me George through the window, and as his tears mixed with raindrops he said, “Take George to Papa. If he has to go to the hospital he won’t be alone.”

That was fifteen years ago, and from that day forward George was never far from my father’s side. He rode shotgun in Dad’s motor home during summer-long fishing adventures, and indeed spent many a night in the hospital. When Dad’s bed was made, he would place George on top with his legs crossed for character. 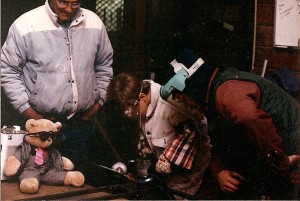 My first inkling of Dad’s emotional bond with this bear came when he was sick with the flu and fighting a relentless fever. I mentioned George, sitting at the time on Dad’s headboard. “George,” he said, “Good ol’ George always takes care of me.” With that he brushed away a sentimental tear and placed George under the covers, tucking him in.

The bond between Sean and his grandfather continued to be something of great importance to them both, and the bear they had shared for so many years, once a gift from a grandfather to his grandson, more important than either Sean or I could have ever imagined. We would soon realize that George the bear was also a messenger; a stuffed angel who would deliver comfort and love in times of great need.

Dad died last year of a brain tumor, a sudden and devastating blow to Sean, now 20 years of age. In his final weeks, it was necessary to keep George where Dad could see him at all times. As the end neared, speech had become almost impossible for Dad. Sometimes the words were there, but he couldn’t speak them. Sometimes the words just disappeared mid-stride. But the day before he passed, Dad experienced a moment of clarity in which he declined further medication and then spoke to Sean privately; a rare moment he said that all grandfathers don’t get as they prepare to leave this Earth. He told Sean what it had meant to have him in his life, and how proud of him he was; what great things he was capable of.

Afterwards, he had me position his right arm, now limp and numb to all sensation. He had me tell him exactly how he was laying. “Perfect,” he said softly. Then he had me tuck his stuffed angel under the covers beside him and promise that under no circumstances would anyone move him until he was gone. I promised.

The next afternoon I brushed my father’s hair from his forehead and told him now would be a good time to take a walk with me and George; that we’d go as far with him as we could, but he was to just keep on going. “George will take care of us, Dad. Everything will be Ok.” With that, he was calm and left us. 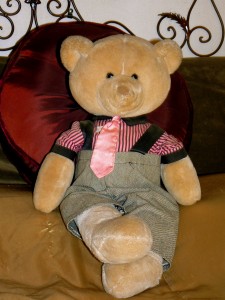 It is, they say, the simple acts of love and faith that endures us. Sean reflects still, his grandfather’s grin or his pause in the midst of a deep thought. And George, well, he’s on the bed just as my dad preferred him, with one leg crossed over the other.