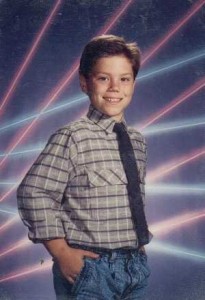 Life has a way of challenging all children as they grow and seek to find their place amongst their peers, and even a child like Sean had lessons to explore and learn from. As it often happened, one of my best tools as the guardian of his young heart was born out of a “grand parental punt” when he was 9 years old; one of those times when you pull something out of the air and pray that you’ve done a good enough job to make it work.

Sean was the beneficiary of something I call my “scrapbook from the heart”, those lessons of life passed down from one generation to another. This particular page from my scrapbook held the lesson of “integrity”; it’s meaning taught to me by my father. I believe (as my father did) that integrity is something that you feel, as much as it is something you uphold with your actions and honor. Putting that in “child-speak”, something they can really grasp at a young age can be a challenge.

There was a group of kids that Sean longed to be a part of, a popular few who were always together. One day, accompanied by another less popular, but sweet buddy, Robert, Sean got his chance to play with these kids. That afternoon, he returned home all excited because he had been invited to go on a fun outing and after a brief explanation, asked for permission. I looked around and asked about Robert, had he gone home to get permission too? Sean then told me that the other kids didn’t want Roberts to go, and that the mother who had volunteered to take them on this outing suggested they tell him a little fib. After he went home they could proceed with their plans.

I was furious that a mother would suggest that the kids lie (although I’m sure she didn’t call it that, but never the less) completely blind to the foundation it was setting. I was also concerned that Sean’s compelling desire to be included in the group over-shadowed his compassion for another who like himself, just wanted to “belong”.

“Please Mom?” he begged, rationalizing that if it was the mother’s idea it wasn’t so wrong and that this was his chance. If Robert didn’t find out about it, he wasn’t being hurt. How would he know?

While I could have simply withheld my permission, I wanted to empower Sean to understand the principal of the situation, not exercise my power over him and miss the opportunity to teach him something I thought important. In that split second, I punted…a feat so powerful that its impact would be felt for years to come.

“Sean,” I began, “You know in your heart of hearts that lying to that boy and excluding him is wrong, that this mother was wrong to even suggest it. I know you want to be included, but you tell me…how do you feel about lying to your friend? How would you feel if it had been you that the group had lied to? You tell me…where does this rate on your “integrity scale”?

“Your integrity scale,” I said again, “…that feeling inside that says something’s either right or wrong. It makes you feel either really good or really crummy…like a chump.”

Sean’s reaction was swift, “I’m not a chump!”

“Look,” I continued, “On a scale of 1 – 10, is this a 5? A 7? How about an 8? If you can look me in the eye and tell me that you really believe it’s an 8 or higher, then fine Sean, you can go. But if you think about it and it falls anything lower on your personal integrity scale, then perhaps you need to rethink this. Either way, remember that you have to live with it deep inside; carry it around with you all the time. That’s how it works. It’s your call.”

With the weight of integrity squarely on his shoulders, I gathered my nerve and walked away leaving Sean to decide. Overwhelmed by either guilt or shame, which one I hardly cared at the moment, Sean told the boys that he didn’t think he’d go and went instead, to find the boy who had been left behind. I worried for a moment that perhaps I had been too hard on him, expecting too much. But his happy relief over the situation told me otherwise, and he was proud of himself…his integrity scale in tact. 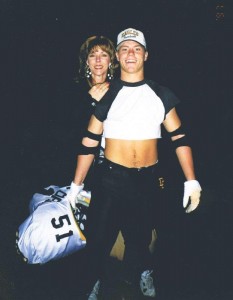 Over the years there were important times in which I pulled out that faithful integrity scale – much to Sean’s dismay. I always knew it was working when, even as a teenager, he would ask in frustration, “Why do you have to do that? Nobody else’s mom makes them use an integrity scale?”

“Ah, but if they only would,” ran through my mind as I’d smile, knowing that he was about to make another “right” decision, unable to “chump” on his integrity and honor. Today, both friends and colleagues alike hold Sean’s integrity in high esteem, but even more importantly, Sean is a young man who understands the true value of his honor.

Of course, I’m waiting for the day when he pulls out his own “scrapbook from the heart” with his children and asks, “How does this rate on your integrity scale? Is it a 5, or a 7, or how about an 8?”

2 thoughts on “The Integrity Scale”