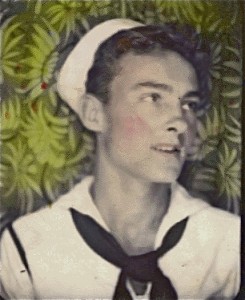 In 1942, aboard the USS Lang DD399, a restless crew began a four-day search for German submarines known to be in the waters of Bermuda. The calm of each passing moment would fall hostage to the unknown, the hills of my Tennessee youth a lifetime away. I was the baby of the ship and had arrived only three months earlier, my naval career a total of five months old. It’s not easy for a boy of seventeen to become a man among men overnight, but he does so with the help of others, those whose experience and reputation outweigh his own fear. One in particular would forever frame my memories.

D.P. Moon was his name, a commodore of six to eight destroyers. He was a rather large man of six foot plus; a handsome man with a soft-spoken nature, but one in which full command was clearly his. Engaged in something far beyond my comprehension, like others, I mounted my courage with that of D.P. Moon.

On a clear morning surrounded by peaceful skies and endless water, I stood watch from a post high above the ship, the point of our mission somewhat muted by inactivity. Suddenly my next breath would be stolen and my throat rendered shut as I defied the telescope of a distant submarine staring back at me as if undressing the entire ship. The visual intruder was off the starboard side approximately one mile away.

“Submarine!” I shouted, anxious and stunned by the sighting. A voice from below responded with a sharp request for location. But in that “be all you can be” instant, I was rendered dumb; unable to retrieve even the most simple of naval terms necessary to communicate in distance and degrees. The fear of failure I suppose, left me grasping for memory of my training and desperate to respond. With nothing left but instinct, I reached out beyond the ship and pointed with one mighty finger…”there!” Acknowledging my difficulty and embarrassment, Executive Officer, Paul Southerd responded, “I’ll assume that’s your way of saying ninety degrees, Roberts.”

The crew of the Lang would soon relax their battle stations and learn that what they had experienced was not an encounter with German’s, but a training exercise known only to the Captain, his officers, and Commodore Moon. And although my alert had been overshadowed by inexperience, Moon recognized my actions as commendable nonetheless. He awarded me with something that carried the emotional weight of a medal, a medal D.P. Moon was known to give only when deserving in his eyes, by his standards, and by him personally. He bestowed upon me a Baby Ruth candy bar and a pack of Juicy Fruit gum. The emotion of such a simple thing as candy from Moon is still today, overwhelming.

Men the likes of D.P. Moon (who was later promoted to Admiral and died in the battle of Normandy), E.O. Paul Southerd, and my dearly loved skipper, Captain E.A. Cei, took a boy from Tennessee and shaped him into one of the men aboard the U.S.S Lang, the man he is today. My memories are ones of great pride, admiration, and sincere gratitude.